One of America’s most distinguished choruses, the 152-member San Francisco Symphony Chorus known for its precision, power, and versatility. The SF Symphony Chorus performs more than 26 concerts each season and is comprised of 32 professional and 120 volunteer members. San Francisco Chronicle classical music critic Joshua Kosman has praised the Chorus for its “tonal beauty” and “customary vibrancy and ardor.” Most recently, the Chorus can be heard on the SFS Media recording of Charles Ives’ Symphonies Nos. 3 and 4 along with Music Director Laureate Michael Tilson Thomas and the San Francisco Symphony, released in November 2019.

The Chorus is also featured on recordings with Tilson Thomas and the SF Symphony in Beethoven’s Cantata on the Death of Emperor Joseph II, Symphony No. 9, and Mass in C major; Mahler’s Symphony No. 2 and Das klagende Lied; Ives’s An American Journey; and selections from Berlioz’s Lélio. The Chorus, under the direction of Conductor Laureate Herbert Blomstedt, can also be heard in Grieg’s incidental music for Peer Gynt; its first recording of Mahler’s Symphony No. 2, which was nominated for a Grammy; and a collection of choral works by Brahms. The Chorus has recorded John Adams’s Harmonium twice, on ECM under Edo de Waart’s direction and on Nonesuch with the composer conducting; Gordon Getty’s Annabel Lee and Young America with Tilson Thomas and the SF Symphony in live concerts for inclusion in a PentaTone Classics disc of Getty choral works; and Jerod Impichchaachaaha’ Tate’s Tracing Mississippi and Iholba with the SF Symphony for Thunderbird Records. The Chorus has released two solo recordings—Christmas by the Bay, which was released in 1998 on the Delos label and nominated for a Grammy in the Best Classical Crossover category, and Voices 1900/2000, released on the Delos label in 2001.

The Chorus appears in the second season of Keeping Score, the San Francisco Symphony’s national television program, in Ives’ Holidays Symphony. The episode aired nationwide on PBS in 2009 and is now available on DVD, Blu-ray, and for free on the Symphony’s YouTube channel. The Chorus can be heard on the soundtracks of the films Amadeus, The Unbearable Lightness of Being, Godfather III, and on the video/DVD release of the Emmy-winning Sweeney Todd with the San Francisco Symphony

*Member of the American Guild of Musical Artists 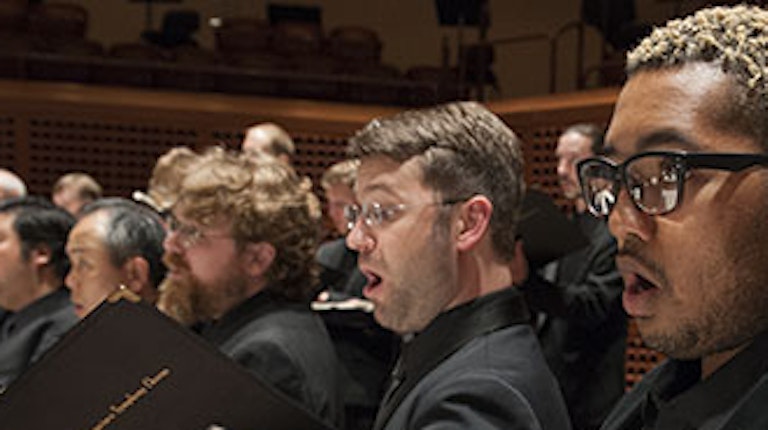 Auditions opening in April and May!