Starting out:
Suzanne: Neither of our parents played instruments, but I like to think that we got our performing genes from our mother, who was a professional acrobatic contortionist. I started violin when I was 5 1/2 in a Suzuki violin class in Detroit. I was too small to take piano lessons, like my older brother and sister. One day, Kelly snatched my violin away and started playing it in class, which was when the teacher insisted that Kelly start lessons at the age of 2 1/2.

Kelly: I completely disregarded the admonishments not to touch Suzanne’s violin! My greatest pull was seeing Suzanne have fun with the violin while I was expected to be content coloring and drawing. I enjoyed the social aspect of the Suzuki method. The group classes are made to be fun, with musical games and playing together.

Suzanne: At our house we would all be practicing at the same time, and not all the rooms had doors separating them.

Kelly:My parents were happy when we would practice (especially me) and they would excuse us from doing dishes after meals if we were practicing. It was quite a robust sounding house and we had music going on all hours of the day and night. My dad would even fall asleep under the piano while we were practicing.

Early musical influences:
Suzanne: We often attended concerts by the Detroit Symphony, sitting up in the balcony so as not to disturb others while two-year-old Kelly would conduct with her baton, and then fall asleep during the second half. We also got to perform for Itzhak Perlman in a masterclass as kids. 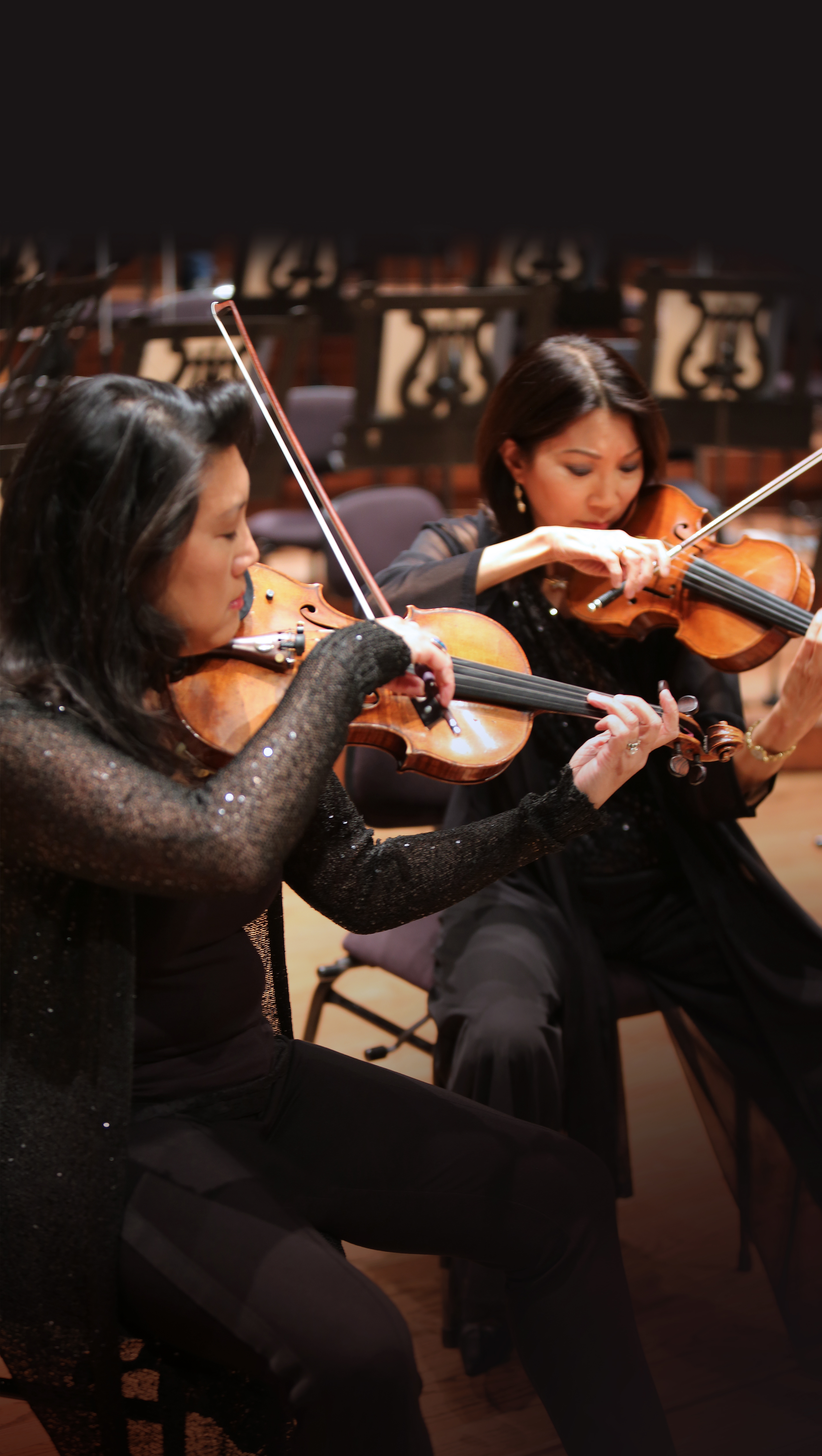 Kelly and Suzanne playing the violin.

On joining the SFS:
Suzanne: I was concertizing in Europe, living in Paris with our pianist-sister Stephanie Leon Shames, when Kelly sent me the music for the violin audition saying, “I’m tired of you living so far away, let’s take the audition together!” Luckily, we both got in.

Kelly: We grew up being one of two Chinese families in our school district in the Midwest, and it was, at times, difficult growing up like that. When I was looking at orchestras to audition for, I looked at top orchestras in cities that had more ethnic diversity. When I was offered a one year substitute position here, my dad said I should go, so I did. When it was time for the next audition, I sent Suzanne the music and told her to come. Aside from having fun sister time, we were at each end in my apartment, practicing away. We would walk over to each other, play something and ask what the other thought.

On cooking and family:
Kelly: Our father learned to cook in his parents’ Chinese restaurant, and my mother made beautiful spreads for our recitals when we were young. She was a high school home economics teacher, so she couldn’t help but teach us well!

Suzanne: We enjoy cooking for each other, and when you get my husband, [SFS violinist Dan Smiley] and his sister’s family [Sarn Oliver and Mariko Smiley, also SFS violinists] along with extended family over for the holidays, we alternate houses entertaining each day.

Kelly: I also like to bake for my colleagues at the SFS. I’ll bring in cakes, cookies, and other delectables to
celebrate birthdays or help them through rehearsals and concerts.

Kelly and Suzanne on a hike in Marin.

Favorite part of living in the Bay Area:
Suzanne: I enjoy the climate, beauty, and diversity of the Bay Area and all its offerings: organic markets, great restaurants, yoga studios on every corner, and its eco-consciousness.

Kelly: Aside from being surrounded by fabulous music making, colleagues, and family, we have great beauty all around us, incredible restaurants, art and musical offerings, outdoor escapes, and wonderful weather. (Maybe I don’t love all the rain, but I’ll take it over a blizzard and freezing temperatures most days!)

Outside the SFS:
Suzanne: I love to travel (including seven summers playing with the Asia Philharmonic), hike, do Ashtanga and Iyengar yoga, and am passionate about alternative medicine, naturopathy, and healthy cuisine

Kelly: My husband and I are volunteers with the Spear Open Wide Foundation, which operates a full time dental clinic in Guatemala. The goal is to open permanent clinics providing access to dental care where none existed before. I also like to run/hike the trails around Mt. Tamalpais, and my newest hobby is knitting.