These Symphony-commissioned feature articles offer insights into the music you’ll hear in the concert hall. 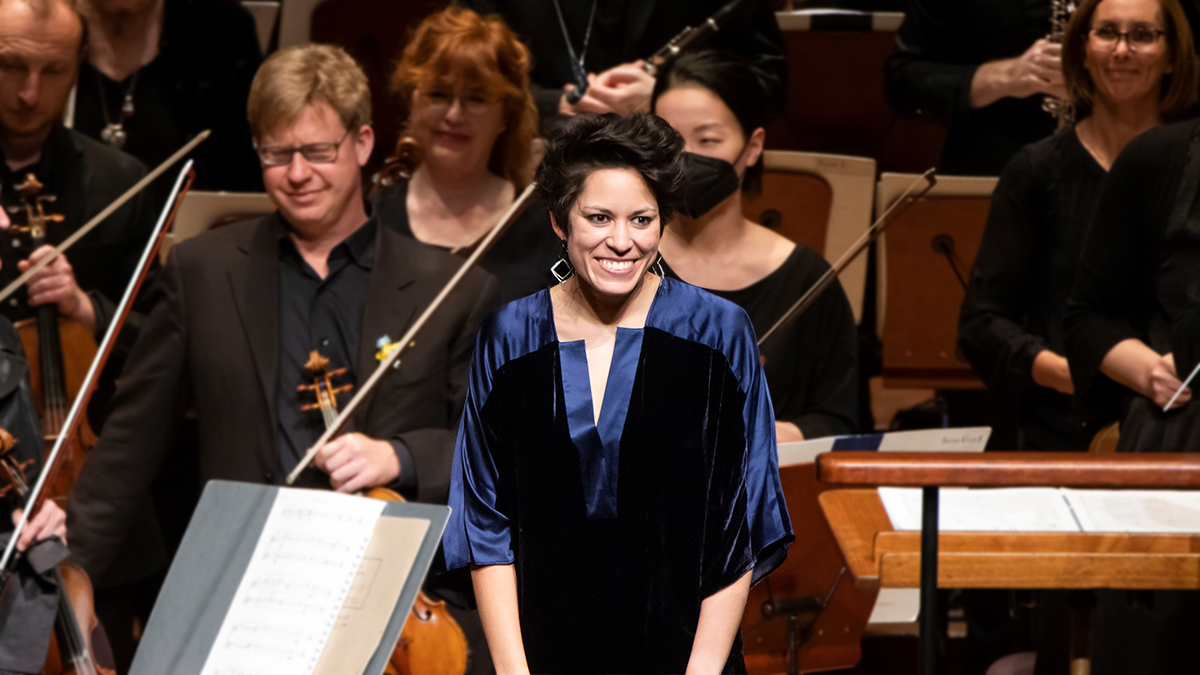 “I’m a very visual composer. I think when people hear my music, they can get that sense.”—Elizabeth Ogonek”

What’s a moondog?
It's a kind of halo that happens around the moon because of the way the ice crystals in clouds refract light.

So which came first, the title or the composition?
They kind of came simultaneously. This piece is the third part of a triptych; all the parts relate to looking up at the sky. The first piece is called Cloudline. The second piece is called Starling Variations, which has to do with starling murmurations [a swooping, diving group flight of the birds]. For Moondog, I really wanted to do a vocalese [a melody without words] for the orchestra. I wanted to evoke this sense of nighttime and dreaminess.

For concertgoers who didn’t hear your Sleep and Unremembrance with the Symphony last March, is there a way to describe what your music sounds like?
My three orchestral gods are Stravinsky, Debussy, and Sibelius; all very different composers. I feel a particular kinship with Debussy, because of that French tradition of orchestral writing. What I think most about in my work is how to transform something auditory into something that's visual; I’m a very visual composer. I think when people hear my music, they can get that sense. It tends to be sort of cinematic, not in a “movie music” kind of way, but just visually evocative.

How do you start a new piece?
Painfully [laughs]. I do a lot of pondering before I actually write anything. I need to know what the essential character of the piece is going to be. And then I tend to start to think about what kind of energy the piece will have: Is it contemplative? Anxious? Mercurial? Moody? And then I start getting into the notes, and while I’m doing that, I'm also simultaneously thinking about how to carve out what the structure of the piece will be. I need a kind of long-range view of the piece to know how it's going to unfold in time. My music is very much related to a sense of narrative; I'm really fascinated by literature, and always have been.

How did you become a composer? Did a lightbulb go off one day and you said, “I will compose,” or was it more of a natural evolution?
Kind of a happy medium. I grew up in a very musical household; my mom was a church organist. After starting piano when I was five, in the prep division at Manhattan School of Music, I went to Walnut Hill School for the Arts, outside Boston, also for piano. I had a theory teacher there who encouraged me to try composing. And I pretty much ignored him for a year or two. Then one day I decided to sit down and give in to his pressure and write a piece. That was it for me: “I'm 15 and I will do this for the rest of my life.”

What’s the actual composing process like?
Obviously, the overall experience is thrilling, especially when you get into the hall and the piece comes to life. But when you're writing for an orchestra, with like a gazillion people, after you’ve worked out the character or the harmony of the work, getting it on paper is literally just labor. I want to say, “OK computer program, can you just read my mind?”

What’s different about writing for orchestra as opposed to smaller ensembles?
I think the pacing of a musical idea speaks very differently when I’m working it out at the piano than it does in an orchestral environment. I've noticed that my ideas need to be more spacious when I actually orchestrate them. That’s something I've really spent a lot of time pondering; it's sort of mysterious to me as to why that's true, in terms of the music that I’ve been writing recently.

What’s it like working with the San Francisco Symphony for a second time?
I certainly know who I'm writing for now. I also got the chance over the summer to work with some of the Symphony players at the Lakes Area Music Festival in Brainerd, Minnesota, where they performed Starling Variations, the piece just before this one in the triptych and the one I've finished most recently. I feel like I have a better, a more intuitive sense of what they like to do on their instruments, and the way they work inside of an orchestra. Obviously, I don't know everybody in the San Francisco Symphony personally, but it’s an orchestra with an adventurous spirit and a real, genuine sense of collaboration. I’ve been thinking about that a lot, and it makes me really excited.

On the other hand, the first rehearsal of a piece that hasn't yet been premiered is the most terrifying experience ever, no matter how many times you do it, because you have no opportunities to go back and change it until it's too late!


STEVE HOLT is a contributing writer to the San Francisco Symphony’s program book.